The charming city of Delft is the Netherlands' most historic city. Here is where William the Silent, the first Prince of Orange and father of our Nation, lived and died. It has many historic sites to visit. 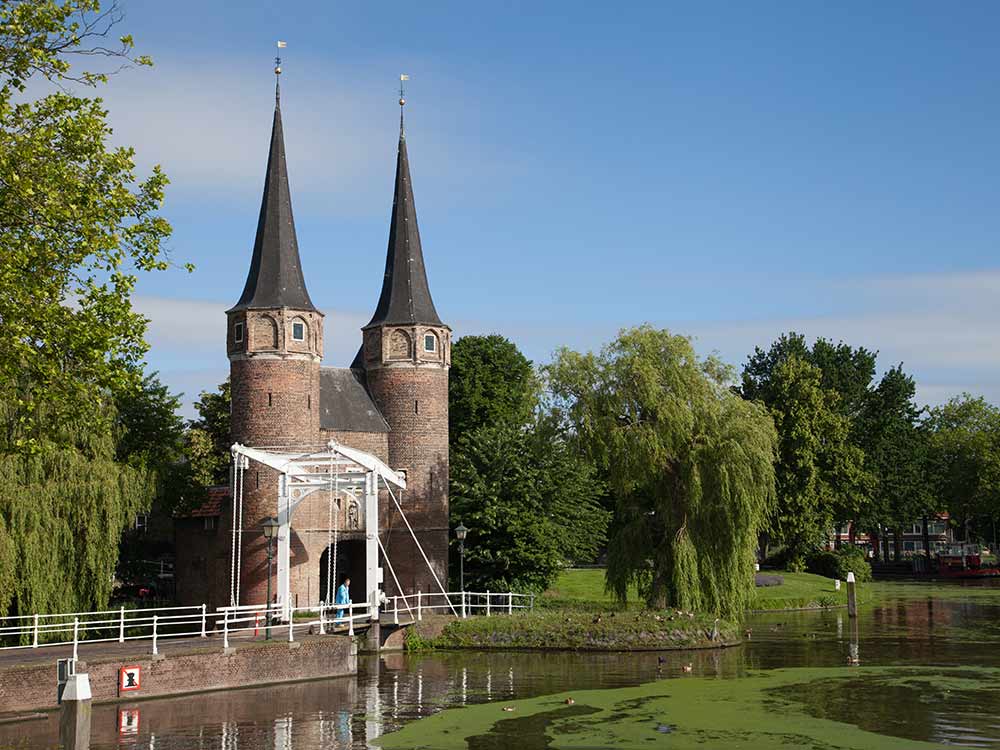 After William the Silent was murdered, Delft remained important for the royal family.

But Delft was also the residence for other historic figures. For Hugo Grotius, for instance. And for the famous 17th century painter Johannes Vermeer.

And then there's the product whete Delft is also famous for: the typical blue pottery known as Delftware or Delft Blue.

So there is a lot of things to see and do in the charming city of Delft. Let us take you for a tour:

Royal crypts in the New Church

When you walk on the Delft market square you are surrounded with beautiful buildings.

On one side there is the 17th century city hall and on the other side is the 14th century 'Nieuwe Kerk' or the New Church.

The New Church cannot be missed. It's the tallest building in Delft and can be seen from afar. 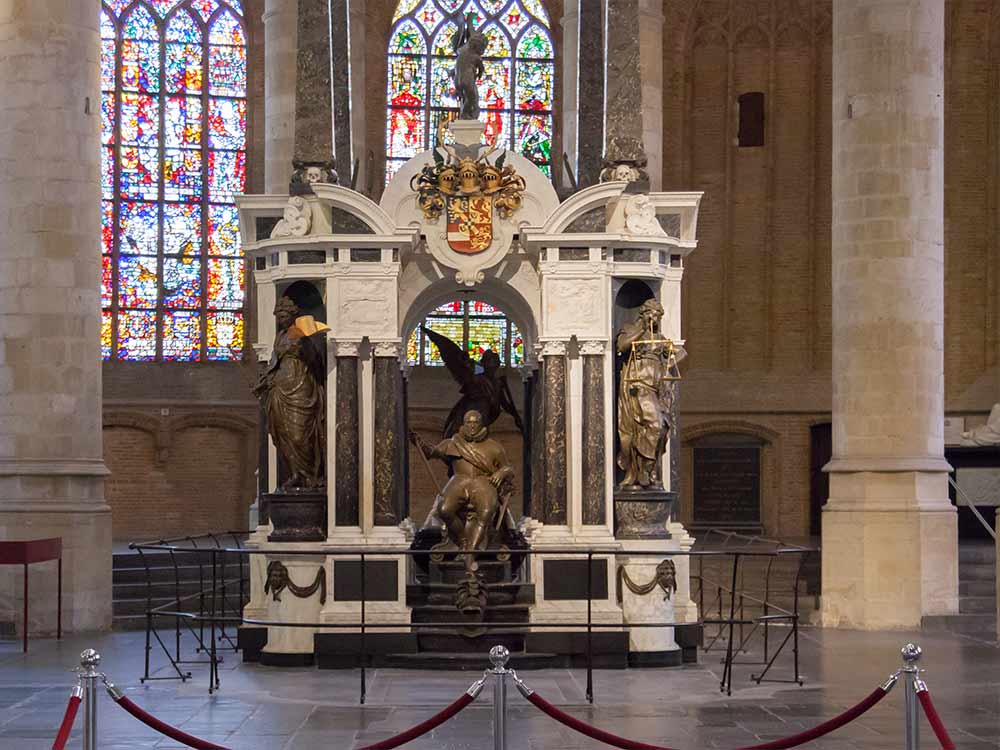 Mausoleum of William the Silent

In the 16th century it was normal for important people to be buried in church. So you will find many gravestones on the floor of the church.

The new church is also the resting place of 'Willem van Oranje' (also known as William the Silent). His mausoleum rests in the back of the church and is available for all to see.

Since then, all members of the family of Orange (the Dutch Royal family) are buried here. The royal crypts are beneath the floor of the church though, not available for the public.

In the New Church, you will also find the mausoleum of Hugo Grotius. And in front of the church, there is a large statue of him.

The work of Hugo Grotius is one of the foundations of International Law. In the Netherlands he is most famous for his escape from the castle in which he was imprisoned.

Hugo Grotius was imprisoned for life at the castle Loevestein for disagreeing with the prince.

In this castle he was allowed to study and he had access to many books delivered in book chests. One day he managed to escape by hiding in one of these chests. 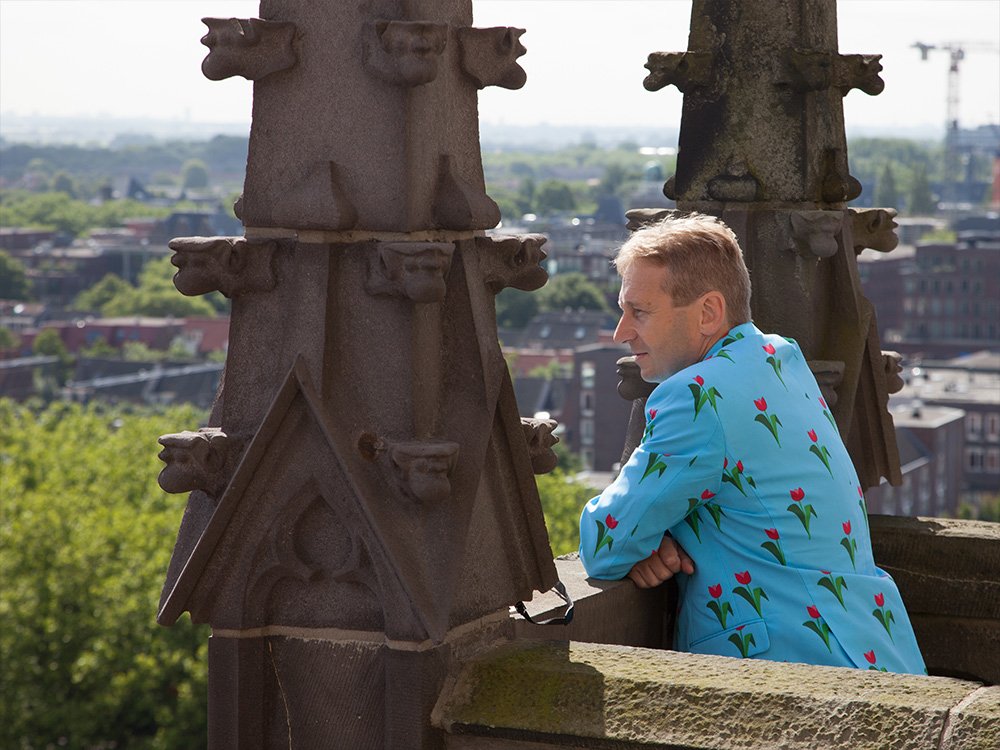 The tower of the New Church is the second highest church tower in the Netherlands.

You can walk the 376 steps to go to a height of 85 meters (279 ft). The view from the tower is stunning. With good weather you can see up to The Hague and Rotterdam.

There is no elevator so make sure you are ready for a good climb.

More history in the Old Church 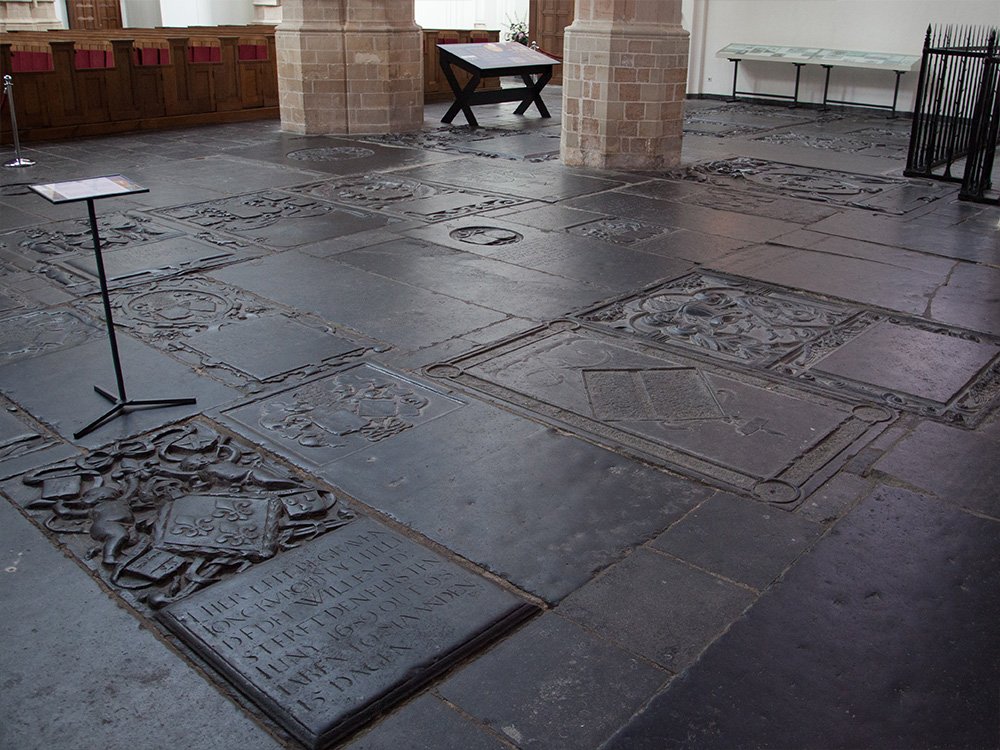 The many gravestones of the Old Church in Delft

The name New Church suggest that there must be an Old Church ('Oude Kerk") as well. And indeed there is.

From far you can see that the church tower of the Old Church is on a strange angle. The tower angles two meters (6.5 ft) from the center.

It is almost like the Dutch tower of Pisa. It was build next to one of the canals and that proved to be a weak foundation. It has since then been reinforced.

Inside the Old Church, the graves of many other famous people can be found. Especially naval heroes like Piet Hein and Maarten Tromp. But also the scientist Antonie van Leeuwenhoek, and the painter Johannes Vermeer. 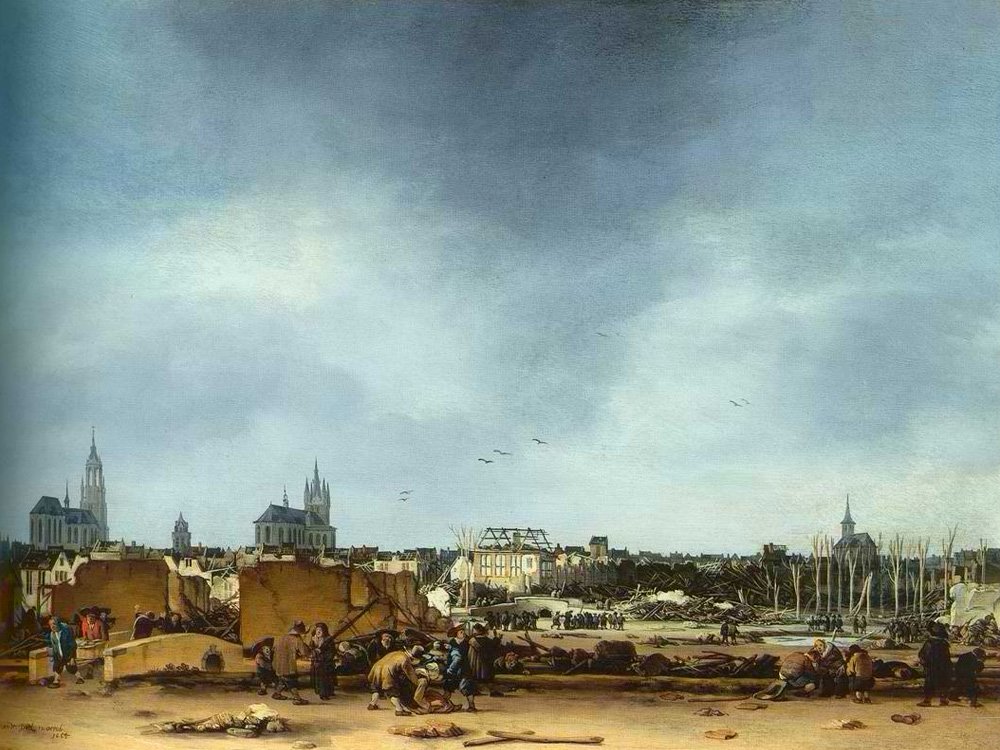 The autumn morning of the 12th of October started out like every other day. However at 10:15 a gunpowder depot blew up, destroying over 500 houses, the monestary and all the leaded glass windows of the old and new church.

Over a hundred people died instantly and thousands were injured. The bang was heared all the way up to Texel in the most northern part of the Netherlands.

This incident was called as the 'Delftse Donderslag' or Delfts Thunderclap.

Museum Prinsenhof, where Willem was shot

Originally the Prinsenhof was a monastery. But in the 16th century it became the home of William the Silent. Because William lived here, the monastery got the name 'Prinsenhof', meaning 'Court of the Prince'. 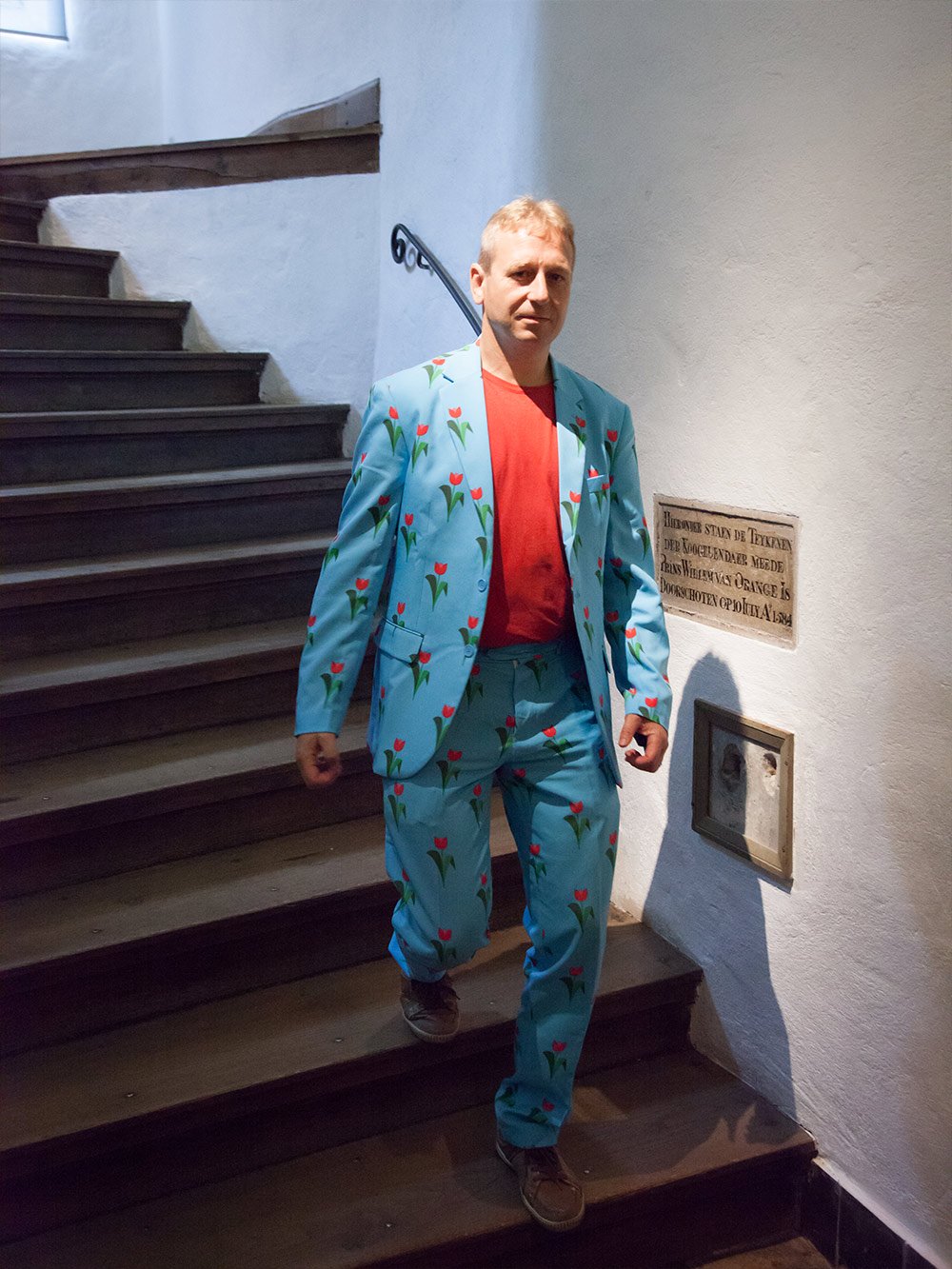 The place where William the Silent was shot. Bullet holes visible in the wall.

In the early 20th century, the Prinsenhof was turned into a museum. There are three permanent exhibitions about William of Orange, Delftware pottery and Masters in Innovation.

When William the Silent joined the rebels in their fight for independence, King Phillip II put a price on William's head.

He promised 25,000 crowns for the assassination of William. In 1584, the Catholic Balthasar Gérards brought two pistols.

William the Silent walked down the stairs in the Prinsenhof after lunch, where Balthasar Gérards was waiting for him. He shot the prince up close with one of his guns that he had filled with three lead bullets.

In one shot, the three lead bullets flew towards William. One of the bullets hit him in the chest, one in the side, and one bounced off the wall. He collapsed and died.

When you visit the Prinsenhof, you can learn about William the Silent and you can even see the bullet holes in the wall where William was assassinated. 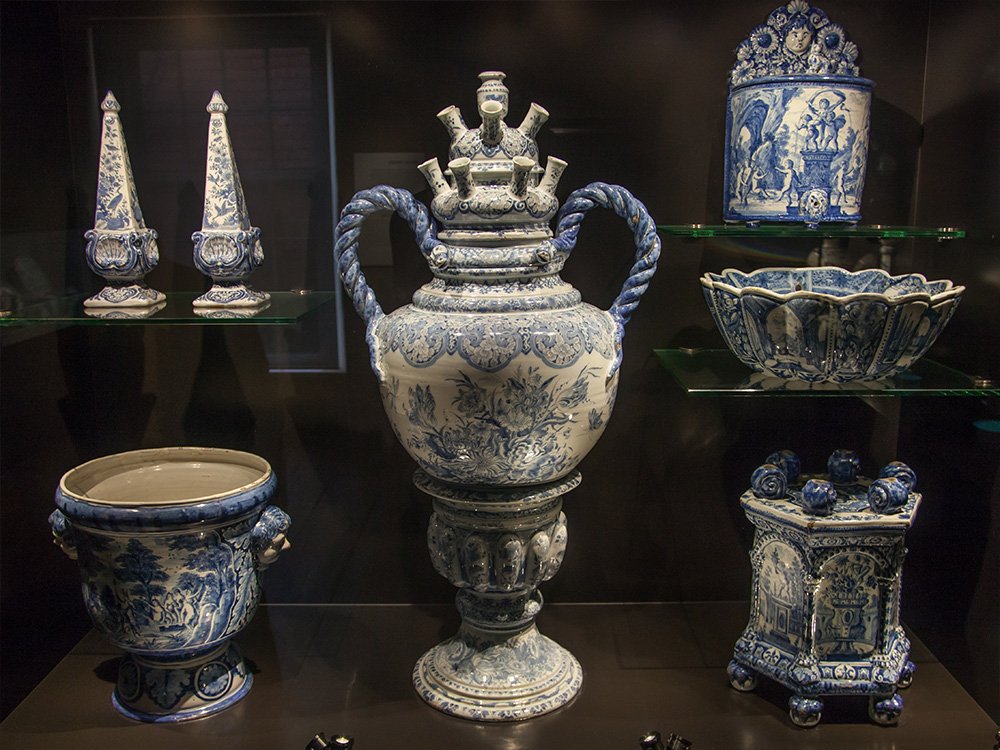 Delftware in the Prinsenhof Museum

The Dutch have always been good at trading. Chinese porcelain was very popular and the Dutch started to trade in it.

But the Dutch found out that they could earn more profit by copying the Chinese porcelain.  Delft became the center of these copycats. During the 16th century the Delftware became so famous, that it started to become a brand of its own.

In the Prinsenhof you can see the Delftware and learn how it was made.

Delft was home to many artists and scientists. Johannes Vermeer who painted works as 'The Milkmaid' and 'Girl with a Pearl Earring' lived in Delft.

A famous scientist that lived in Delft was Antonie van Leeuwenhoek. He is known as "the father of microbiology".

The canals of Delft 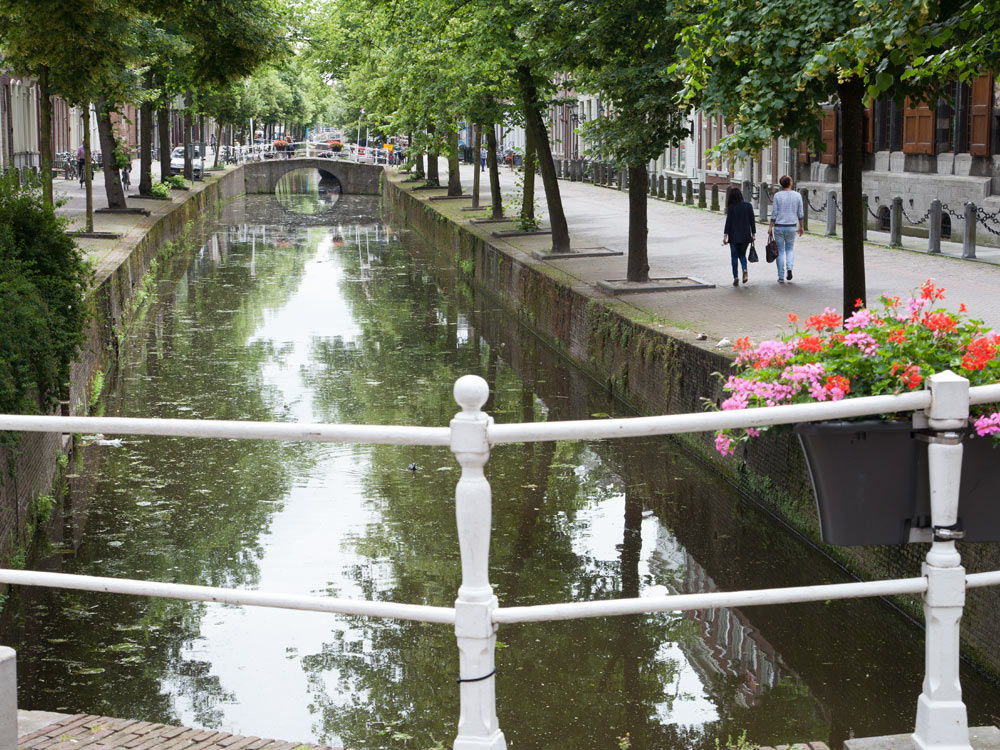 They are some of the most charming canals I have seen in the Dutch cities. The canals are filled with water lilies and the bridges are decorated with flowers and leaves. Some of the canals also have artwork in them.

If you are on holidays in the Netherlands and you want to visit a city or two besides Amsterdam, i highly recommend Delft. 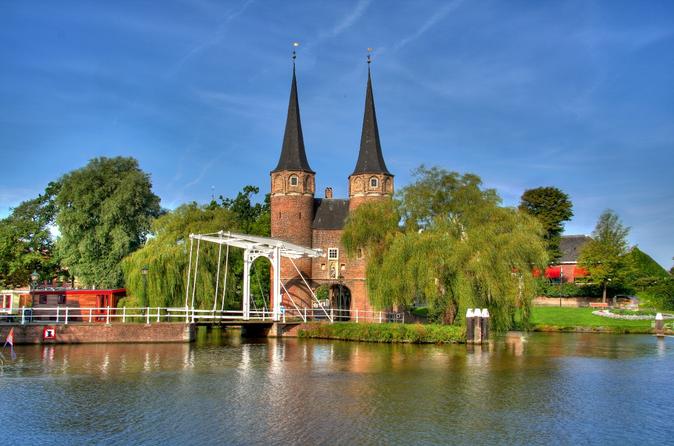 The Dutch royal family, Delft Blue ceramics, 16th and 17th century buildings, and Dutch golden age painter Johannes Vermeer. These will be some of the subjects of the tour. See you in Delft!