Leiden, The city that inspired Rembrandt to become a painter 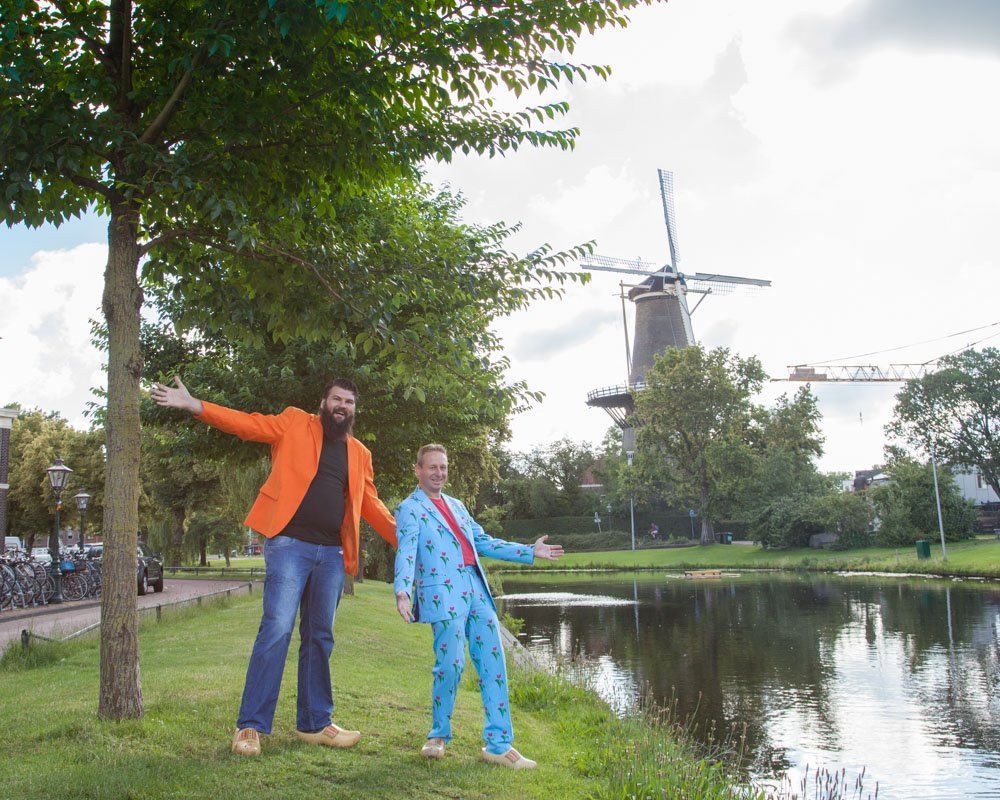 Walk around Leiden, Netherlands’ beautiful student city. Experience the charming cobbled streets, canals, windmills and bridges. And find out about the history of the Spanish siege, the "Keys of Leiden", and famous painter Rembrandt van Rijn.

The famous Siege of Leiden 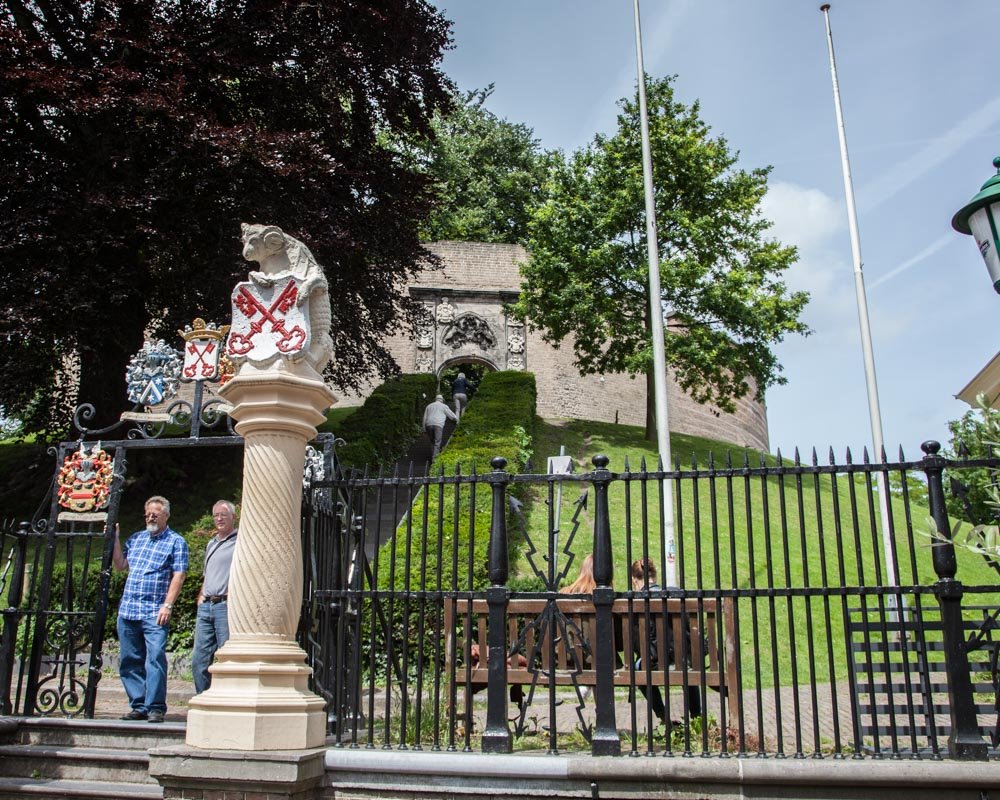 The small fortress or 'Burcht' in the center of Leiden

Leiden has a rich history. It is formed around an artificial hill where two branches of the river Rhine come together.

In the 11th century, ‘de burcht’ was constructed on top of that hill. It is a small shell keep that you can still visit today for a great view of the city.

The same keep played a big role in the siege of Leiden (1574) as the nobles and rich used the keep as shelter while the Dutch Rebels took up the arms of to fight the king of Spain.

The Prince of Orange decided to pierce the dikes and let the sea flow into the low lying lands. This way the rebel fleet could reach the city and lift the Spanish siege.

If you happen to be in the Netherlands on 3 October, Leiden is a very fun place to visit. On that day there is a yearly festival that celebrates the lift of the siege (Leids Ontzet).

What's up with the keys? 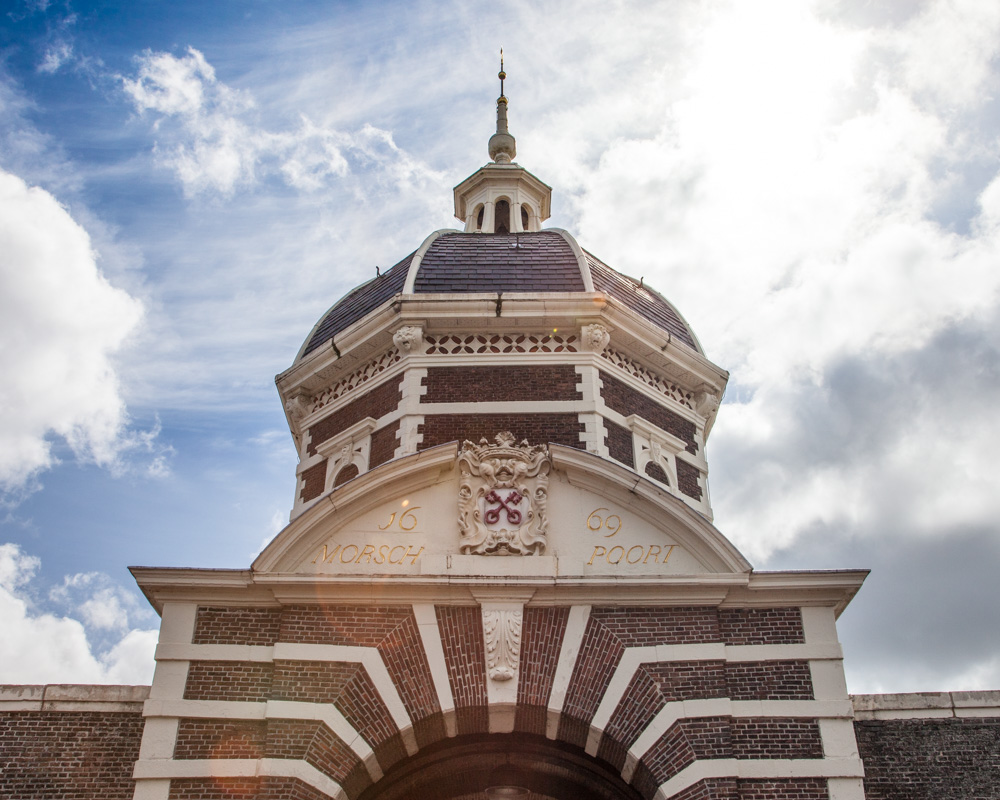 Keys of Leiden at the western city gate

When you walk around the city of Leiden, you see keys everywhere. The patron saint of Leiden is St. Peter, the gatekeeper of heaven.

The coat of arms of Leiden are two keys crossing each other. This symbol is seen in architecture and art all throughout the city.

Leiden is also known as ‘de Sleutelstad’ (City of Keys). 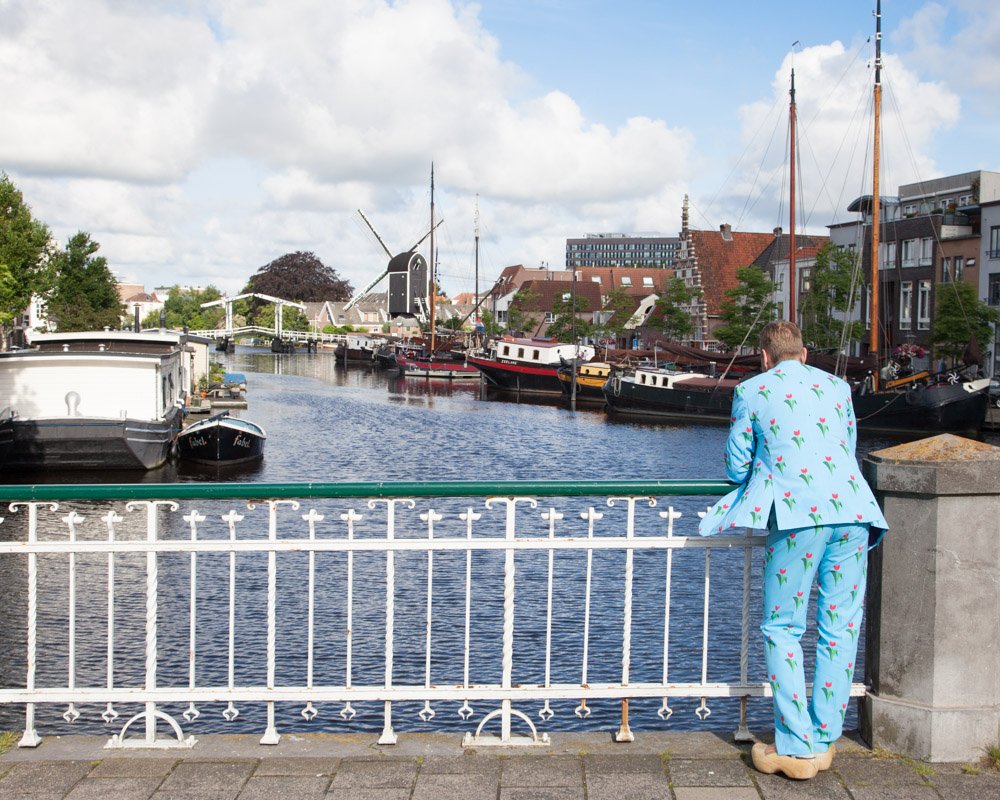 The famous Dutch master painter Rembrandt was born and raised in Leiden. Rembrandt is most famous for works as ‘The Night Watch’ (Displayed in Rijksmuseum, Amsterdam) and ‘The Anatomy Lesson of Dr. Nicolaes Tulp’ (Displayed in Mauritshuis, The Hague).

Some of his other works can be seen in ‘De Lakenhal’ in Leiden. This building was a guild hall for the cloth merchants, but is now used as a museum.

From here it is a short walk to the house where Rembrandt was born and the Latin school where he studied. Although his original birth house is gone, many of the other buildings are in their original state.

During this walk you can experience the 17th century atmosphere that inspired many of Rembrandt’s works.

Leiden and the New World 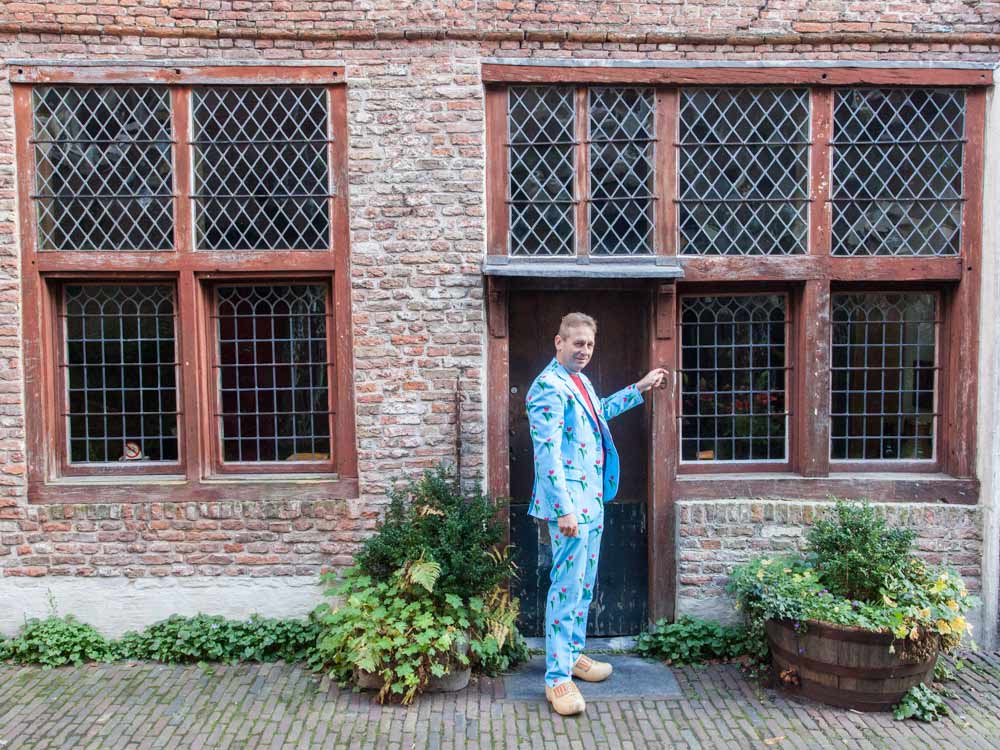 The Pilgrim Fathers, the early settlers of the New World and important characters in the founding of the United States of America, lived in Leiden before going to the New World. 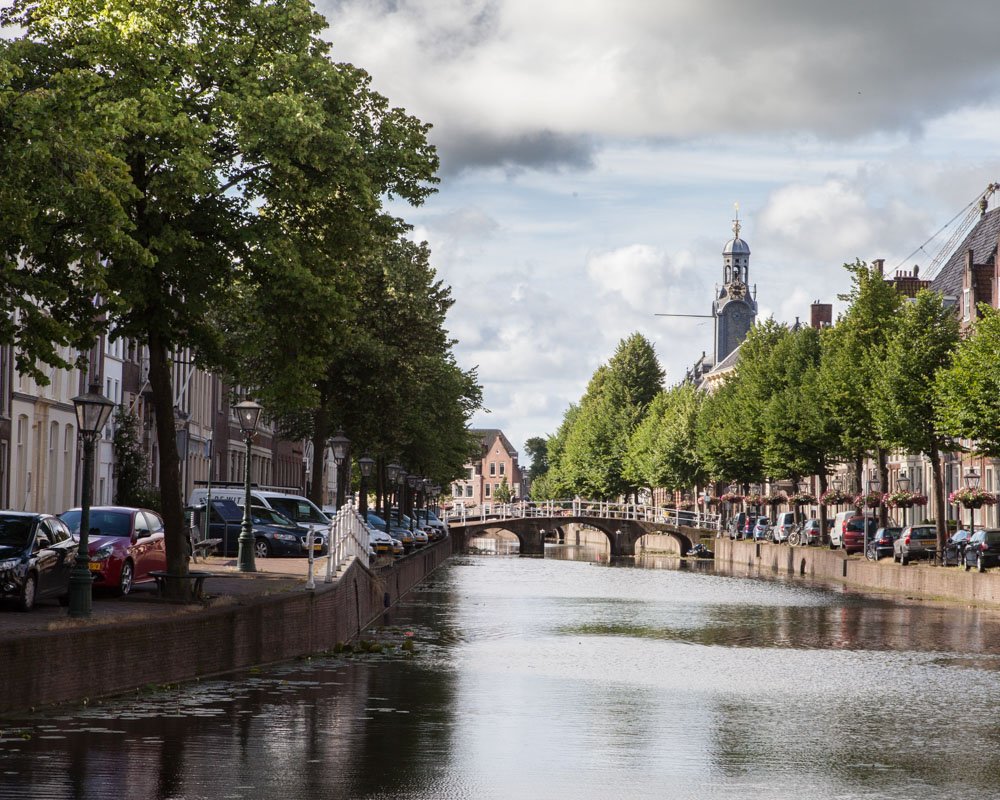 The Rapenburg canal street in Leiden, With the tower of the university in the background

The University of Leiden is the oldest University in the Netherlands. It was founded in the 16th century by Wilhelm of Orange and it was a gift to the people of Leiden for their courageous rebellion against Spain.

Many of the Pilgrim Fathers were able to support themselves by working at the University of Leiden.

In the history of the University there have been many gifted teachers such as several noble prize winners and also Albert Einstein. Today there are many (international) students living in Leiden, giving the city a young, friendly and open vibe.

What to do in Leiden? 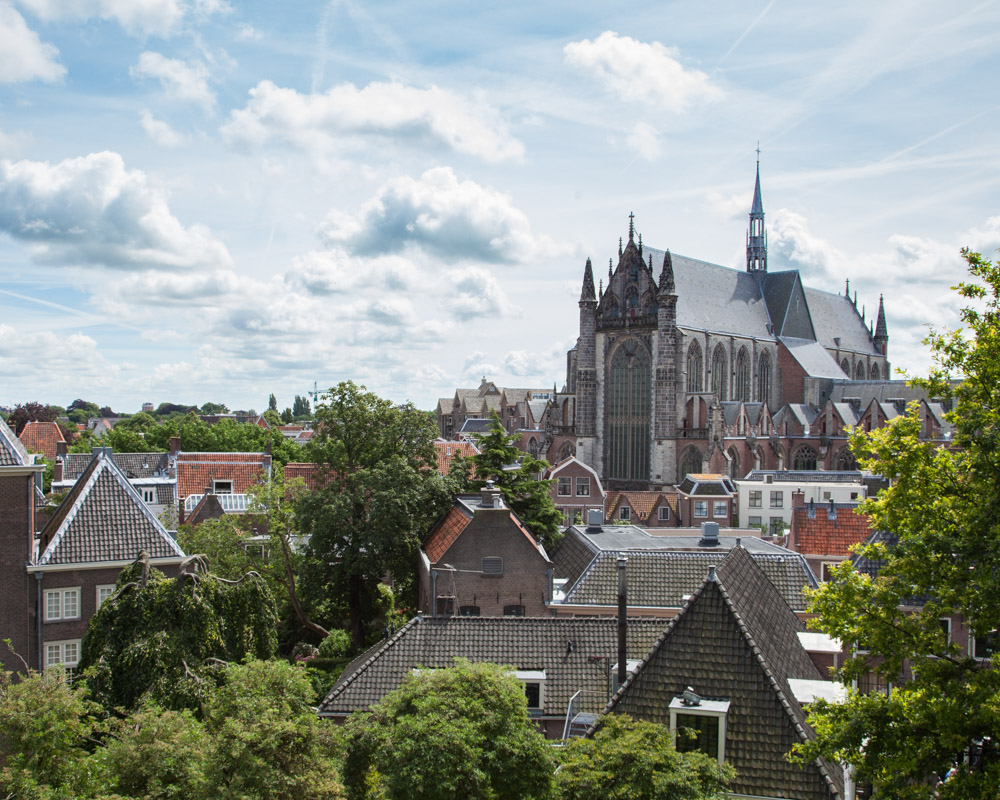 Sightseeing from the fortress 'De Burcht' in the city center of Leiden.

Walking and sightseeing is made easy in the city of Leiden. You can easily follow the city walking route ‘de Leidse Loper’ by following the signs. The first sign can be found at the Rijnsburgerburg, close to Leiden central station.

The route will bring you to the churches, windmills, bridges and more. Most of the locations also have information signs in Dutch and English (Distance: 5km/3.1mi).

Leiden also has many museums which are worth a visit:

Explore the countryside around Leiden

Leiden lies in between a lot of Dutch polders, and not far from the sea. It is therefore a good idea to also explore the countryside around Leiden

Rent a bicycle
Cycle through the Dutch polder and green farm fields. Visit the nearby towns of Wassenaar and the beach of Katwijk. A fun and healthy way to see more of The Netherlands.

Take a boat tour to the Lakes
You can rent a boat or a boat tour and sail through the canals of Leiden and visit the nearby lakes.

Join us on a tour

Would you like to explore the city of Leiden with us? You can join us on a tour!
Just contact us for more information. 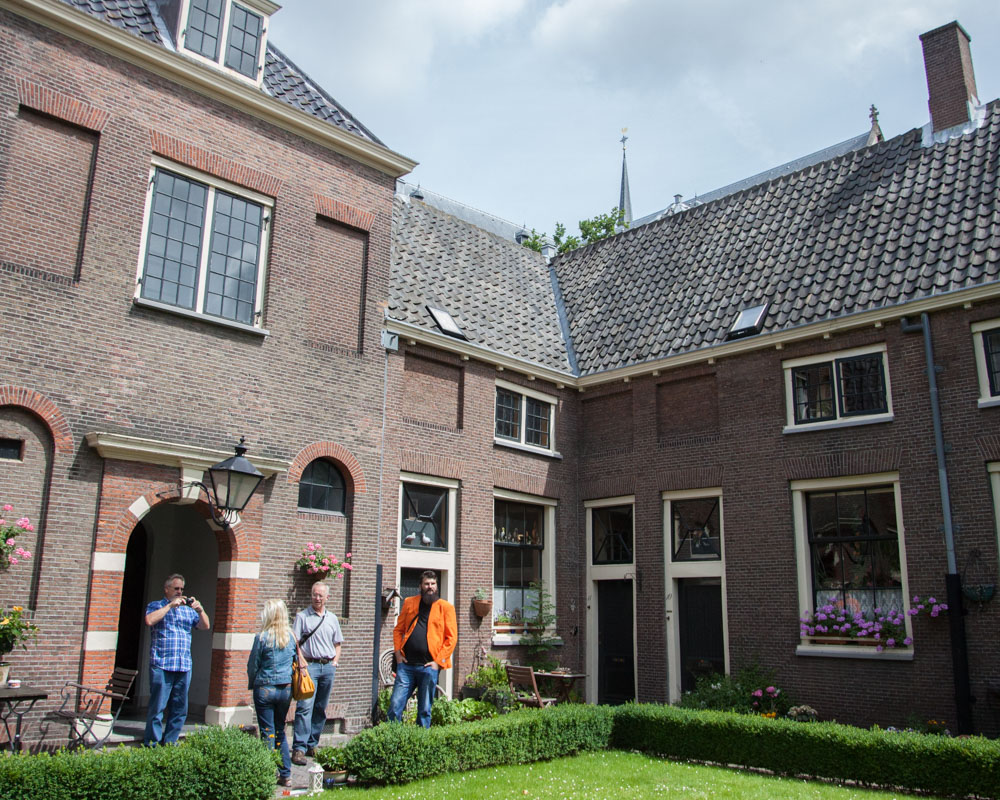 During the tour we will show you all the secret spots in Leiden such as this courtyard where the Pilgrim Fathers used to live. 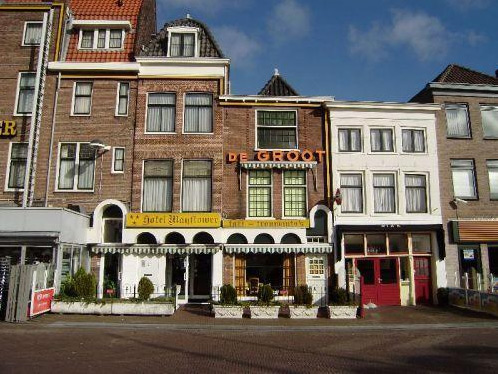 This budget hotel is located in the city center at the Beestenmarkt. A town square surrounded by nightlife venues, restaurants and a movie theater.

This hotel is located right next to the train station. You can reach cities such as Amsterdam, The Hague, and Rotterdam with a train ride of less then half an hour.

The historic city center of Leiden is about a 15 minute walking distance. The rooms are modern, air conditioned and clean. 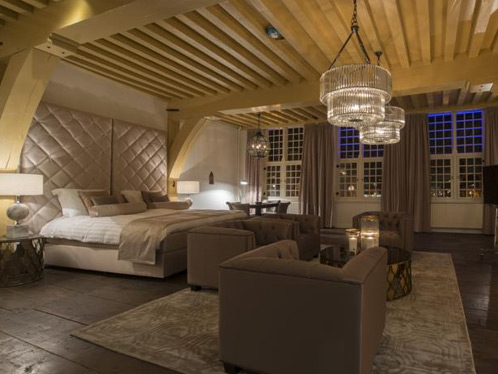 Spend the night like a royalty at the Steenhof Suites

The building is a monument from the 15th century. The rooms are an amazing combination of historic and modern.

Staying in these rooms, you can easily imagine the days of the Dutch master painters. The suites have done an amazing job at capturing Leiden's romantic atmosphere.

The location is perfect. Right in the historic city center.

Check out these other accommodations in Leiden.