From the middle of November, the Netherlands changes. The children get excited and everywhere you look, on tv, the news, and in shops, you can see a jolly man with a big white beard and red robes carrying gifts for children.

This might sound familiar, however this man does not come from the north-pole with a sled, but on a steam ship from Spain. It's not Santa Claus but Sinterklaas! We will teach you how to celebrate Sinterklaas like the Dutch! 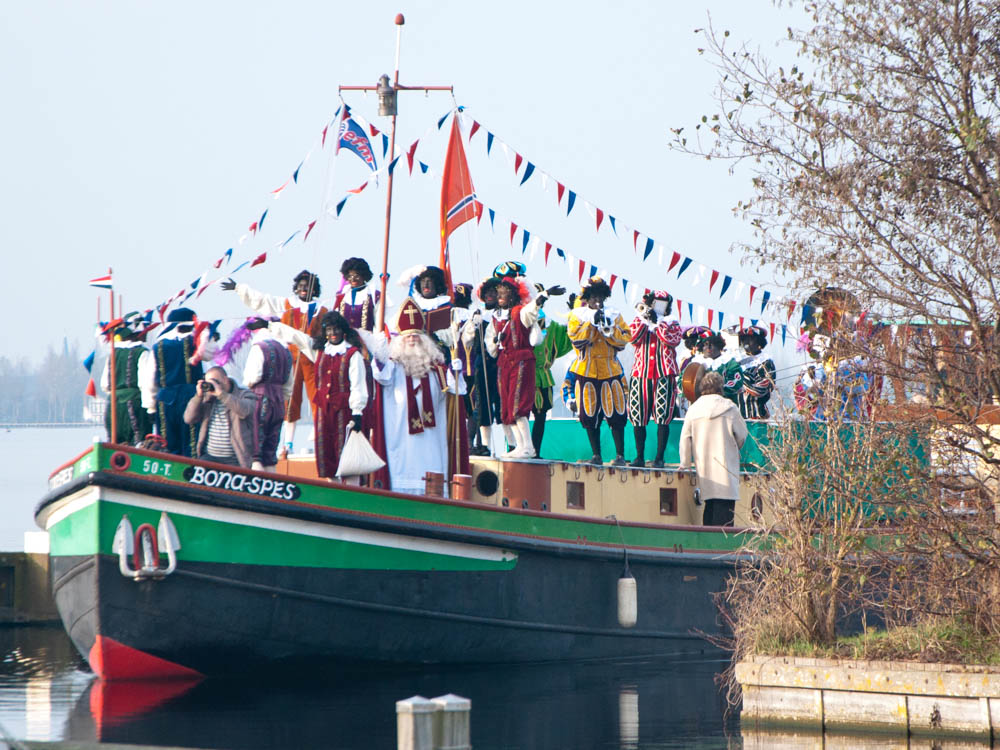 The figure of Santa Claus is largely based on the Dutch Sinterklaas. There are some differences however. Change the Elves to Black Petes, the stockings hanging above the chimney to shoes in front of it, Rudolph the reindeer to a white horse called Amerigo, and then the transformation is almost complete.

Also known as Saint-Nicholas, this mythical figure is inspired by Nikolaos of Myra, a Greek bishop from the 4th century. He was the patron saint of children and sailors. According to legend he had a habit of secret gift giving. 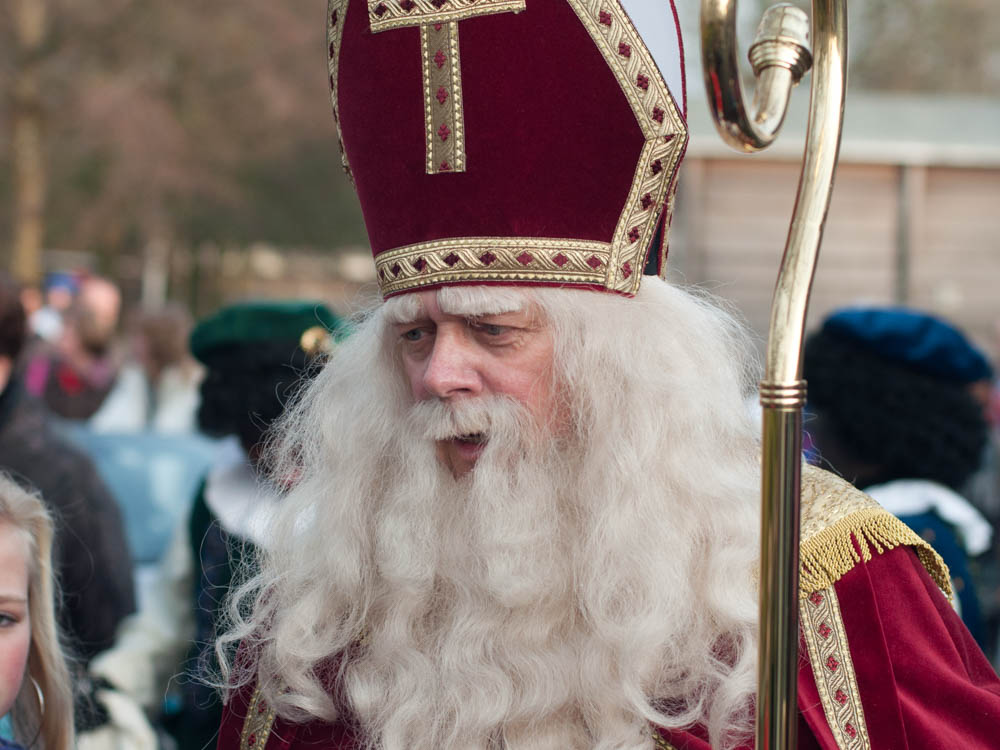 Each year, Sinterklaas arives from Spain with a steam boat filled with gifts and sweets.

He is portrayed as an elderly man, with white long hair and a full beard, riding a white horse. He wears red bishops clothing, a red mitre and ruby ring.

He carries a golden staff with a spiral on top, and he has a big book that has the names of all children, and in which is written whether a child has been good or bad in the past year.

Who is Black Pete? 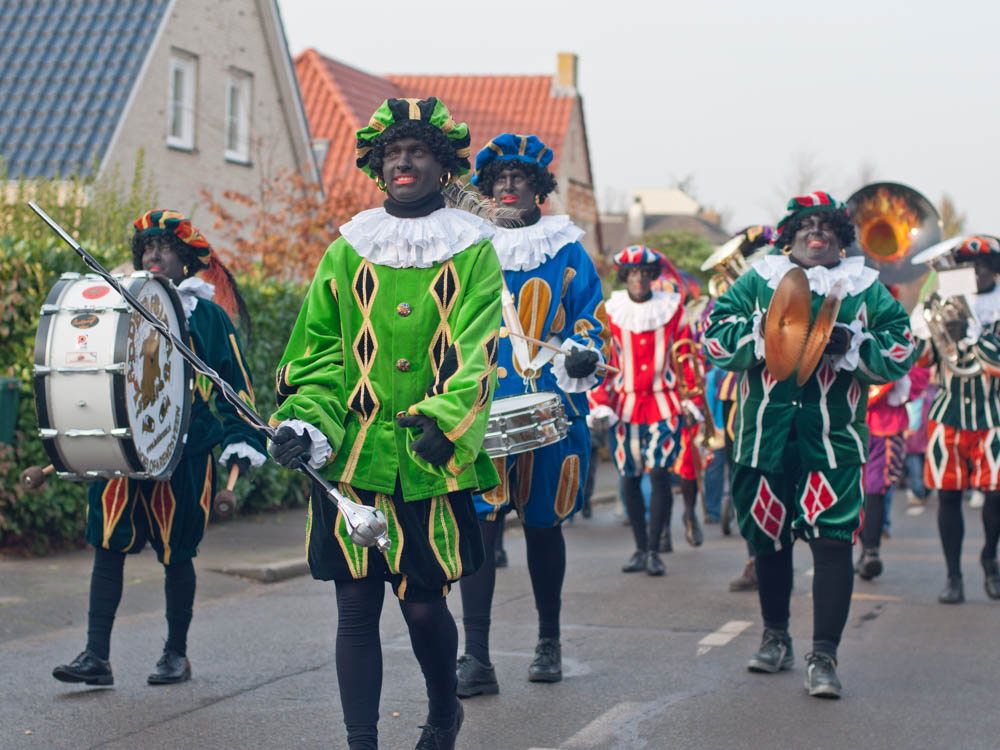 Sinterklaas is accompanied by his helpers. The Zwarte Pieten or Black Petes, are dressed in bright clothing, resembling the clothing of 17th century Spanish noblemen. They carry bags of candy and sweets.

For a long time the Black Petes, had black make-up, red lips, curly hair and a golden earring.

His appearance led to heated debates, because they have resemblances to the racist stereotype, Blackface. This in combination with the Dutch history in colonialism and slavery, makes it a sensitive subject matter. 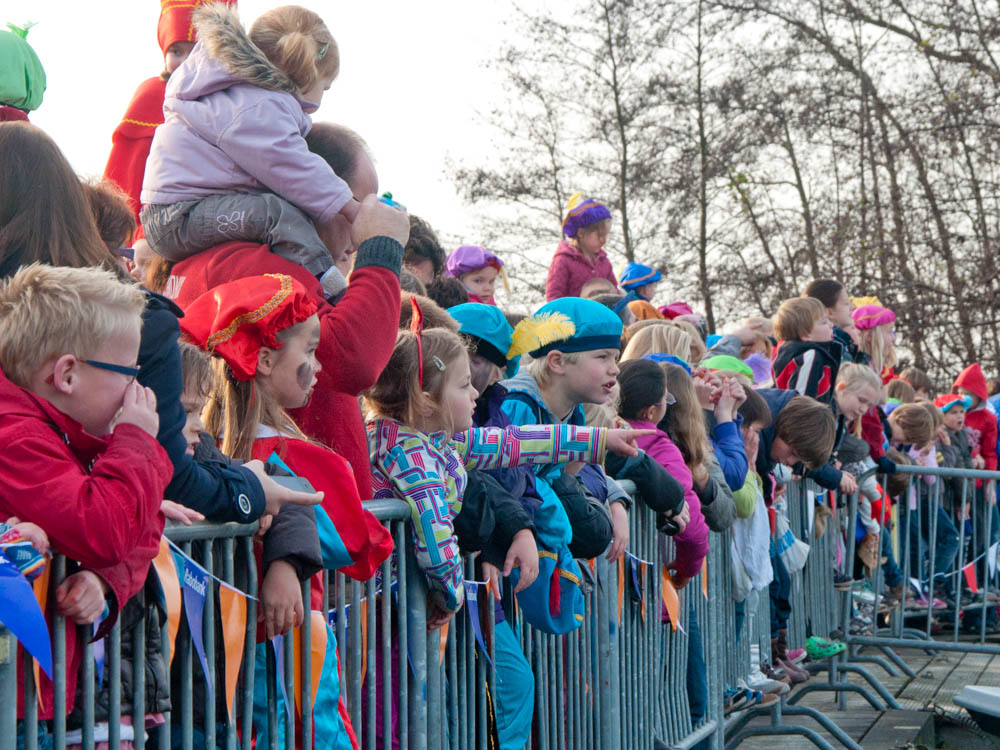 There is a big party in the city where Sinterklaas arrives in the middle of November. The city of arrival changes each year, and all the adults and children that live nearby come and welcome him.

The days following the big arrival, Sinterklaas and his helper visit the other towns and villages in the Netherlands.

The most important night however is the 5th of December. It is the night before the birthday of Sinterklaas. The night is called Pakjesavond or Gift Evening. The children get many gifts and a lot of candy.

A shoe in front of the fireplace 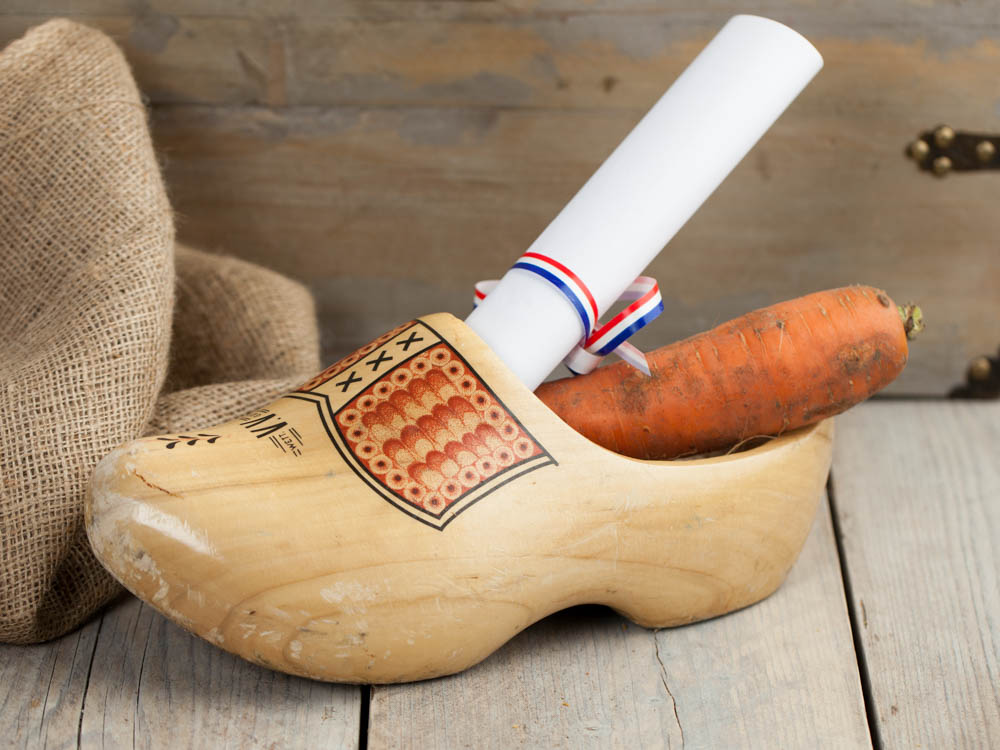 The Dutch children put one of their shoes in front of the fireplace. Or if they don't have a fireplace, they can put in near the central heating of the house.

The children fill the shoes with carrots, or hay for the horse of Saint Nicholas. Before the children go to sleep, they often sing a Sinterklaas song next to their shoe. Hoping that the next morning they will find that the carrot and drawings are removed and the shoe is filled with sweets or a gift instead.

If you are in the Netherlands at the end of November, some candy scattering can occur. So don't worry if you see Saint Nicholas helper suddenly throw a hand full of candy towards you, it is perfectly normal. 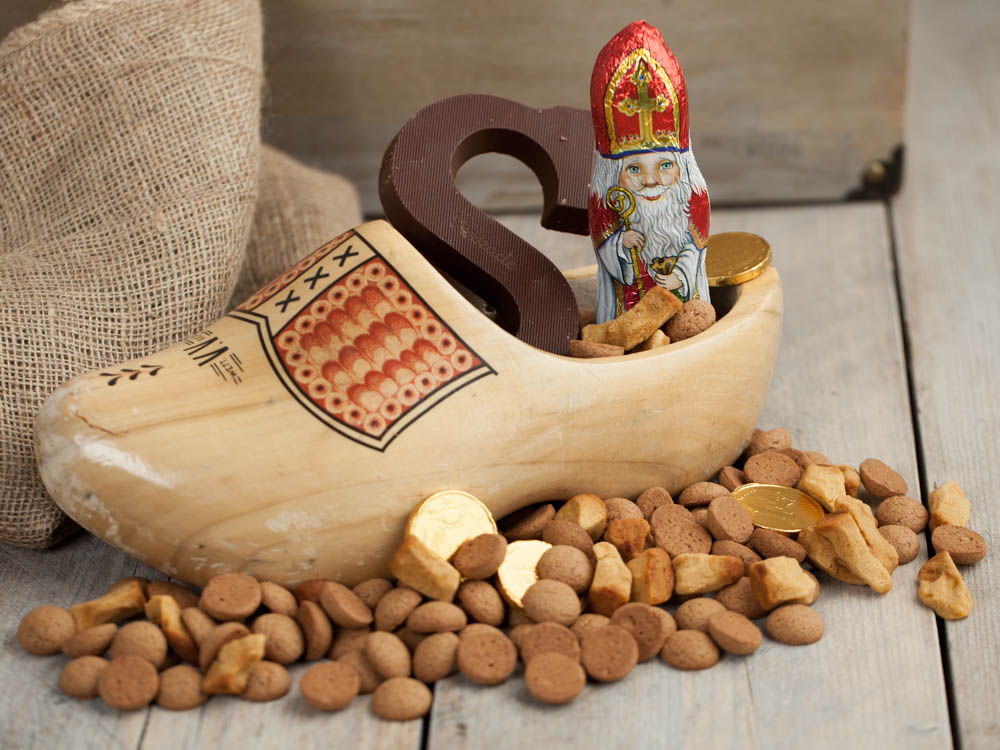 The most famous Sinterklaas sweet is the Pepernoot or Peppernut. They are small cookie-like objects made of rye, sugar and anise. They are quite chewy.

Pepernoten are often confused with Kruidnoten or Spicy nuts. These small cookies are also very popular during the Sinterklaas days, but they look different. They are half spheres with a flat bottom. The Kruidnoten taste like speculaas, they have a gingerbread flavor.

Other sweets include small figures made of marzipan, choclate coins and choclate figurines. If you are really lucky, Sinterklaas wil give you a large letter made of choclate, usually the letter that your name starts with.

None of the delicacies will be given to you if you do not sing the songs. So if you are in the Netherlands during the end of November, make sure you practice some of the famous Dutch Sinterklaas songs. You can find a nice compilation here.

Create a handcrafted surprise and write some  poetry

Sinterklaas is fun for young and old. Teenagers and adults often make surprises for eachother.

Everyone puts a piece of paper with their name on it in a box. The box is shuffeled. Then everyone takes out a name from the box. They have to make a surprise for the person whose paper they drew.

The surprise is a handcrafted object with a gift inside. It can be a piece of art, shaped in a way that resembles the persons hobby or work. 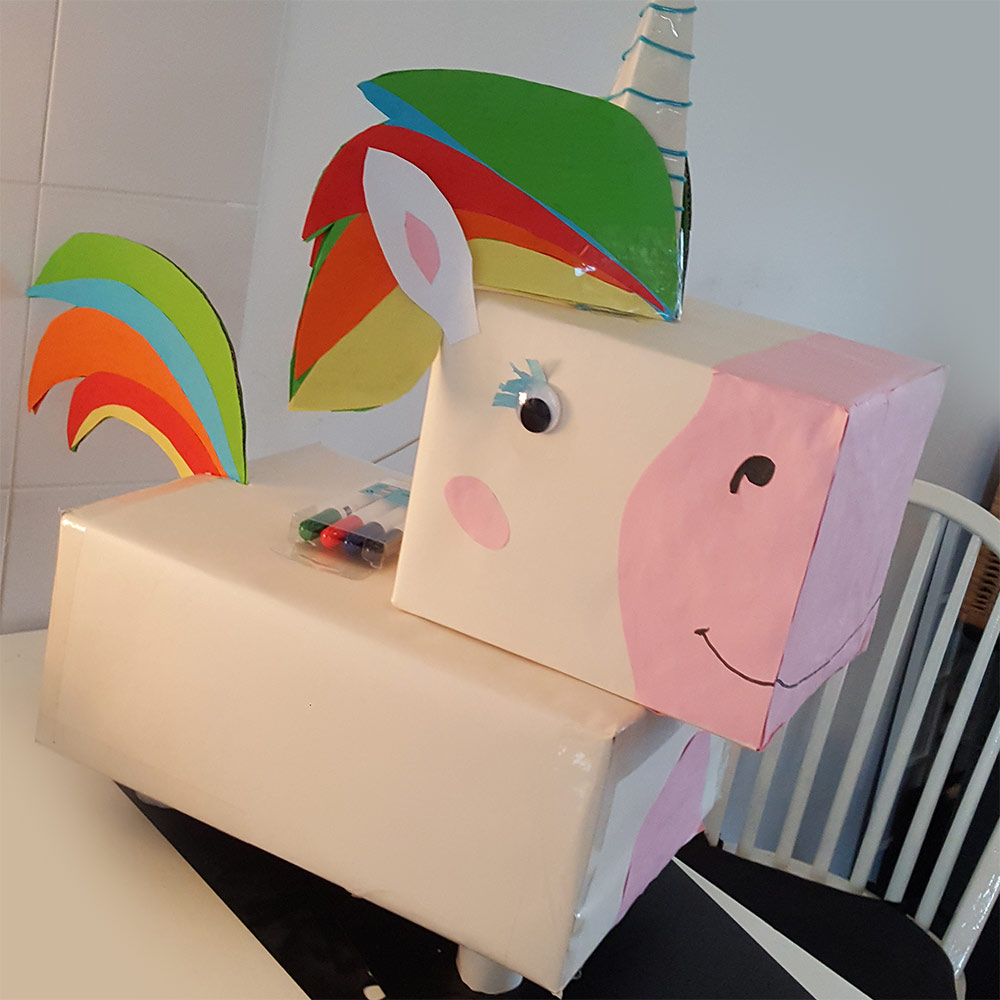 It can be a small quest such as, placing clues all over the place of where they can find their gift.

Or it can be a gift that is wrapped in a complicated way, such as a gift in a block of ice, or a gift wrapped in a lot of paper and tape.

The surprises are usually made out of cardboard, paper, or paper mache.

Traditionally the surprises are accompanied by a poem written in the name of Sinterklaas. The poem is often short, funny, and gives a small hint to what the gift in the surprise may be.

Many of the poems start with "Sinterklaas en Piet zaten te denken, wat zou ik (...) toch eens schenken?" which roughly translates to "Sinterklaas and Peter were thinking, what would (...) like us to bring."

Have a great Sinterklaas

You now have all the ingredients to celebrate Sinterklaas the propper way. If you are putting out your shoe at the fireplace, please send us the picture so we can show it to the world. Enjoy the celebrations!

Return from How to celebrate Sinterklaas to Dutch Culture

Return to Around Amsterdam